CAMP As If – II, Flight of the Black Boxes

Outset India and the Gujral Foundation presented Flight of the Black Boxes, the second in the series of four shows titled As If, by CAMP with support from Goethe-Institut India, Experimenter Gallery, Khoj International Artists’ Association, Devi Art Foundation and Volte Gallery. The exhibition was open to the public from 28th January to 24th February 2015 at 24 Jor Bagh.
The multi-city retrospective, As If, was the first time that the artworks and ideas crafted by CAMP and its constituent members were shown in a solo exhibition format. The other three shows were shown at Experimenter in Kolkata, Dr Bhau Daji Lad Mumbai City Museum and Chemould Prescott Road in Mumbai.
Born in experimentation and uncertainty, black boxes of machines and institutions surround us with seemingly smooth and impenetrable functions. But reintroduce the uncertainty, reopen the conflicts, and the box appears stable in neither form nor function. Twelve works by CAMP looked out through the unstable interior worlds of cameras, memory devices, surveillance systems, electricity and more, developed feelings and strategies alongside them. The exhibition probed and tested technology as black boxes.
Members of the public entered security rooms to dialogue with operators. Elsewhere, a single CCTV camera film from the parapets of Palestinian homes, looking over neighbourhoods that were being broken up into countries. Forces gathered into shapes in Bombay, Delhi, Rostock or Lubljana. A room camera obscura interrupted the black box of video art with live bodies and trees. The house itself, in a constant state of exhibition and erasure, extruded changing alphabets in a work called "Four-Letter Film".

Neighbourhood TV repurposed as conversation systems in a mashup of cable TV and early CCTV systems, in an "urban village" in Delhi. TV sets, CCTV cameras, microphones, video splitter, Rf modulator, XLR and COAX Cables. 7 episodes, Runtime various. The seven “episodes” of this work were born out of seven sets of installations of security cameras and cable TV wiring in Khirkee Extension, an urban village in Delhi. Video became the ‘site’ for these interactions and conversations. In 2006, when Khirkeeyaan took place, the predominant landscape of images was still (as had been for the past couple of decades) television. The security-camera quad produces a set of four “holes” in the surface of television. The fact that people who face the camera also face each other, while also facing their familiar TV sets, produces a tension in the TV image: a redistribution of the gaze, a grid of speaking and listening, and a sense of liveness that is also physically nearby.

Khirkee and Khirkee Extension are fractured by all sorts of lines: caste, religion, money, new and old settlers from different regions. Khirkee was once a feudal village, whose ‘Extension’ has been claimed and been settled in cycles since partition.. Khirkeeyaan's older traversals of this terrain, its conversations, its double logic of safety (in ones own home) and self-exposure, entered directly into a space produced by the non- overlap of land-based politics, and global communication networks. 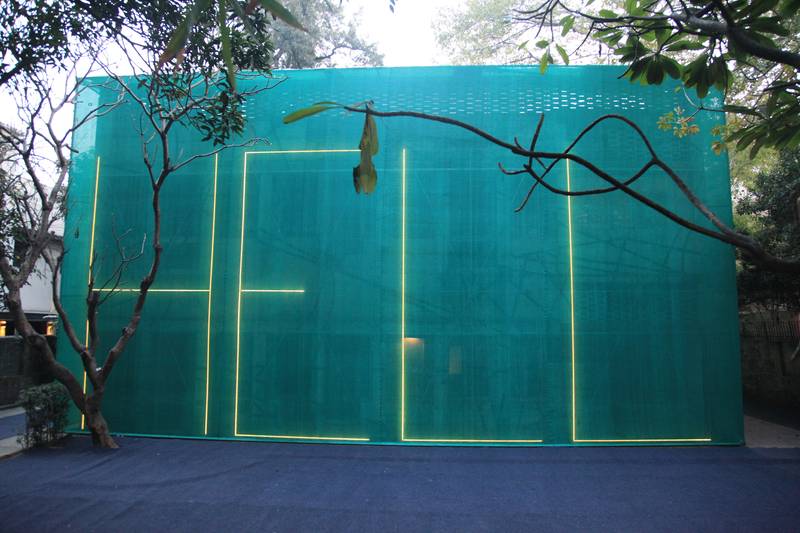 A conversation between two people, at the smallest possible bandwidth, that one could call "film", or narrative. Made of four alphanumeric characters, each having 14 segments. First made using Christmas lights in 2004. Remade in 2015. LED structure, DMX controller, computer.

A sculptural allegory about the difference between video and film. Gateway paper, coffee stirrers, fishing wire, wooden / steel frame, electric fan. Ashok Sukumaran, 2002 The exhibition came to a close on 24th February with a closing talk with Ashok Sukumaran of CAMP, Aastha Chauhan, Shaunak Sen and Srinivas Aditya Mopidevi, who offered responses and questions to parts of the exhibition. Ashok also described the ongoing series, as a landscape or topography of artistic moves. CAMP is a collaborative studio founded in Bombay in 2007. It has been producing fundamental new work in video and film, electronic media and public art forms, in a practice characterised by a hand-dirtying, non-alienated relation to technology. CAMP's projects have entered many modern assemblies: energy, communication and surveillance systems, neighbourhoods, ships, archives – things much larger than itself. These are shown as not having a fixed function or destiny, making them both a medium and stage for artistic activity.