The Gujral Foundation in association with Outset India presented the Outset India Breakfast Series 2014 during the India Art Fair 2014. The breakfast talks were held for 3 days with different speakers and conversations each day in association with The Lodhi Hotel, New Delhi. Day 1 was a conversation with the Art Institute of Chicago curators, James Rondeau (Dittmer Chair and Curator of Contemporary Art) and Madhuvanti Ghose (Alsdorf Associate Curator of Indian, Southeast Asian, Himalayan, and Islamic Art) who discussed their exhibition, Each Night Put Kashmir in Your Dreams, with artist Nilima Sheikh. This exhibition was part of the India initiative that was launched at the museum. Day 2 was a conversation between Chantal Pontbriand, a contemporary art curator and critic and artist Sonia Khurana on her exhibition Oneiric House/Round about midnight on preview during the IAF 2014. Day 3 was a conversation between Philip Dodd, a broadcaster, writer and curator who has won numerous awards, in the fields of broadcasting, publishing and cultural entrepreneurship & Mr. Budi Tek, a Chinese-Indonesian entrepreneur, art philanthropist, and collector. 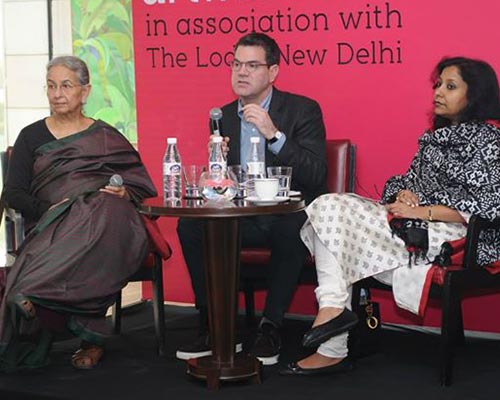