The Gujral Foundation in association with Outset India presented the Outset India Breakfast Series 2013 during the India Art Fair 2013. The breakfast talks were held for 3 days with different speakers and conversations each day in association with The Lodhi Hotel, New Delhi Day 1 was Pooja Sood in Conversation with Alexis Bhagat: “20 Questions” was an enlightening discussion on sound art. With more and more artists and musicians exploring the meaning of sound, a new language is being understood and redefined. The understanding of sound beyond music is leading to new experiments embodying new auditory sensibilities and awareness.

Day 2 was Barbara London in Conversation with William Kentridge: A very interesting session about art practices across the globe.William Kentrige is a South African artist best known for his prints, drawings, and animated films. These are constructed by filming a drawing, making erasures and changes, and filming it again. He continues this process meticulously, giving each change to the drawing a quarter of a second to two seconds’ screen time. A single drawing will be altered and filmed this way until the end of a scene. These palimpsest like drawings are later displayed along with the films as finished pieces of art. Day 3 was Hameed Haroon in Conversation with Rashid Rana: Hameed Haroon is CEO of Pakistan Herald Publicatins (Pvt) Limited, printers and publishers of DAWN – the leading English language newspaper from Pakistan. He has served as the President elect of the All Pakistan Newspapers Society, in Pakistan, Five times. He has one of the largest private collections of paintings and books in Pakistan, notwithstanding the rare maps, textiles and furniture.Rashid Rana is a globally recognized artist from Pakistan, having had solo and group shows at venues such as : 2012 New York Exchange, Notthingham; Singapore Art Museum, Singapore, 2011: Hong Kong Art Centre; Conerhouse, Manchester; Lisson Gallery, London, 2010 : Musee Guimet, Paris; Fotomuseum, Switzerland;Whitechapel Gallery, London; Saatchi Gallery, 2009, Lower Belvedere, Vienna;Asia Society, New York;National Fine Arts Museum,Taiwan; House of World Cultures, Berlin, 2008 Institute of the Modern Art, Brisbane. rancis Morris is Head of collections (International Art) at Tate Modern.. 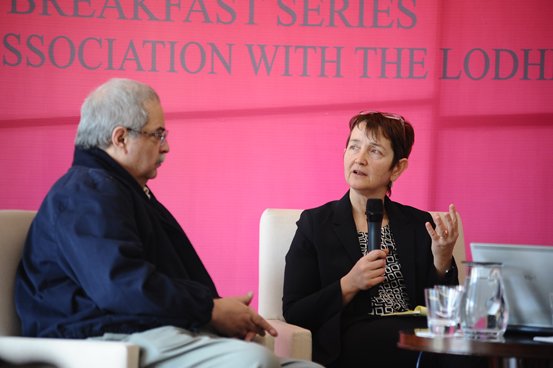