The Silent Call of the Earth

The Gujral Foundation in association with Outset India and Threshold Gallery presented ‘The Silent Call of the Earth’ a solo exhibition by Achia Anzi at 24 Jor Bagh, New Delhi. The exhibition was on view from 2nd to 27th December 2015. The exhibition drew its title from Martin Heidegger’s famous essay The Origin of the Work of Art (first published 1950), in which the German philosopher argues, among other notions, that the struggle between the earth (material) and the world (concept) enables the ‘truth’ to be unveiled in art. The artist quoted the incongruent and the surreal to create a dialogue around the changing significance of the earth in relation to mankind, as an investigation into ‘what is an art and how we can re-discover its wonderment.’

The artist expanded on his research over the preceding three years, which resulted in his interventions at Jor Bagh. The show did not only deal with Earth and the way in which different discourses and contemporary technologies utilized it, but it was also an exploration into the nature of the artwork, its language, and its limitations. The Silent Call of the Earth was an opportunity for the artist to explore the relation between man and Earth, experimenting with space, and abolishing any kind of architectural constraints. The exhibition was described as a laboratory of sorts where Anzi experimented with various objects, like the kiln, the disused parking meter, an excavated gas marker, and a large rectangular structure that hung in the center of one of the rooms. Meanwhile outside in the garden, metal rods ‘grew’ in a patch of overturned earth, replacing the fields of wheat, rice, and barley that are usually cultivated on agrarian pastures. Through this work, Anzi addressed the tug between settled and developed cities and the rural life of agrarian society. The Silent Call of the Earth was a heavily material-based exhibition that showed Anzi’s interest in the relation of the earth to objects. On 19th December 2015, Outset India organized a talk by the artist Achia Anzi that was moderated by artist Ravi Aggarwal and ran in conjunction with the show. 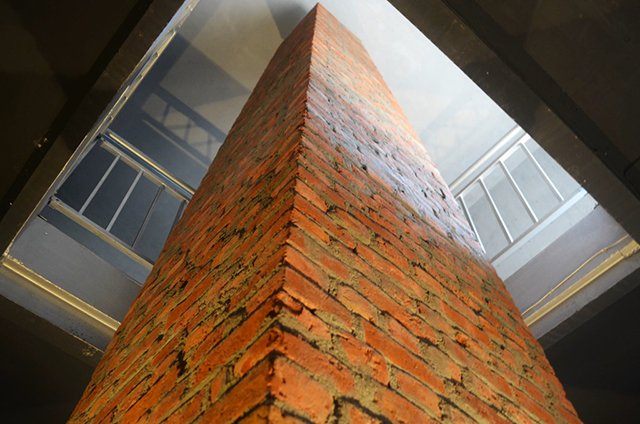