Vuedemic, the film counterpart of Artdemic, in collaboration with The Gujral Foundation and Harkat Studios were delighted to present an all-encompassing selection of unique audio-visual work, in a 3-day online short-film festival from 17th – 19th September 2021 on the Harkat Live platform. We’re honoured to be one of the first platforms in South Asia organizing an event like this.

The first ever Wild Vueing Weekend was very well attended and took audiences through a range of films, exploring both the art film space as well as narrative shorts. Coming from a variety of makers, these films were loosely tied by their introspective approach and artistic nature. Harkat Studios created the program for the festival.

Our jury consisted of the talented teams at The Gujral Foundation and Harkat Studios. We had exciting prizes up for grabs for the filmmakers who come first, second and third during the Wild Vueing Weekend.

We were thrilled to announce the winners of the 1st edition of our Wild Vueing Weekend - Better Man by Mrinal Bahukhandi was awarded first place. After seeing all the amazing films we decided to name two films in second place - Leaving Home by Harshil Bhanushali and Makara by Prantik Basu. Under The Rug by Nayanika Chatterjee came in third place.

SCHEDULE FOR THE 1st EDITION

Fever Dreams witnessed the premiere of artist Sajid Wajid Shaikh’s Why are you wearing that stupid man suit?. This opening film set the context for a program that married both realism and surrealism, introspection and outward reflections. What came after played out like a vivid sensory dream, guiding you through fragments of stories and thoughts, inviting the viewer to piece them together; a visual puzzle of sorts. We were excited to present viewers with a collection of experimental video-art pieces: including captivating animations, video collages, and various audio-visual explorations. 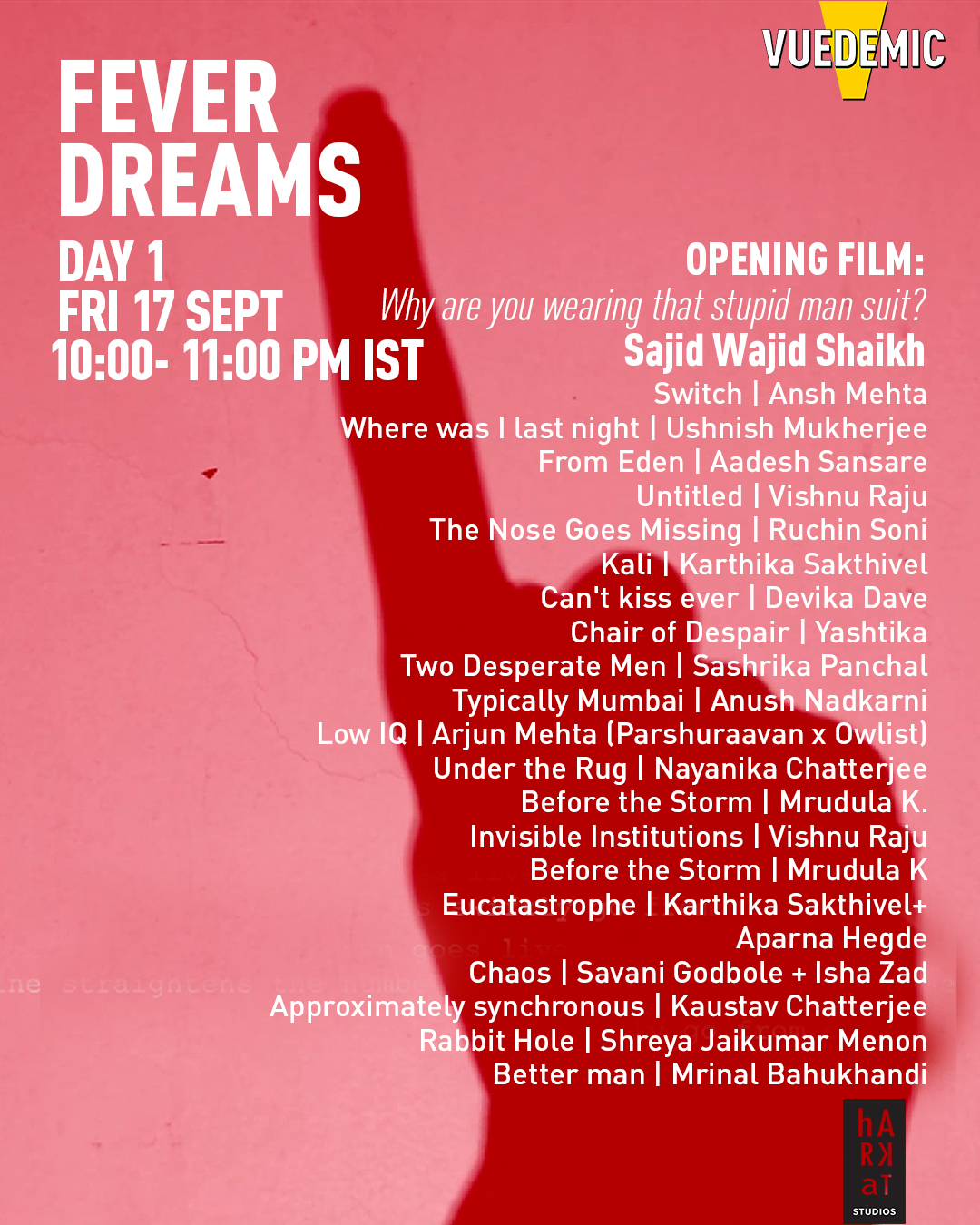 Embodying the intimate yet collective nature of a slam book, this programme was bound together like a diverse group of friends. They have distinct personalities — some are loud, some shy, others envelope you in a warm embrace the moment you see them. Slam Book was a hybrid selection of experimental happenings, flowing into narrative bodies of work. These were audio-visual journeys navigating identity, politics and self. The programme in its entirety was a filmic flip-through of personal histories. 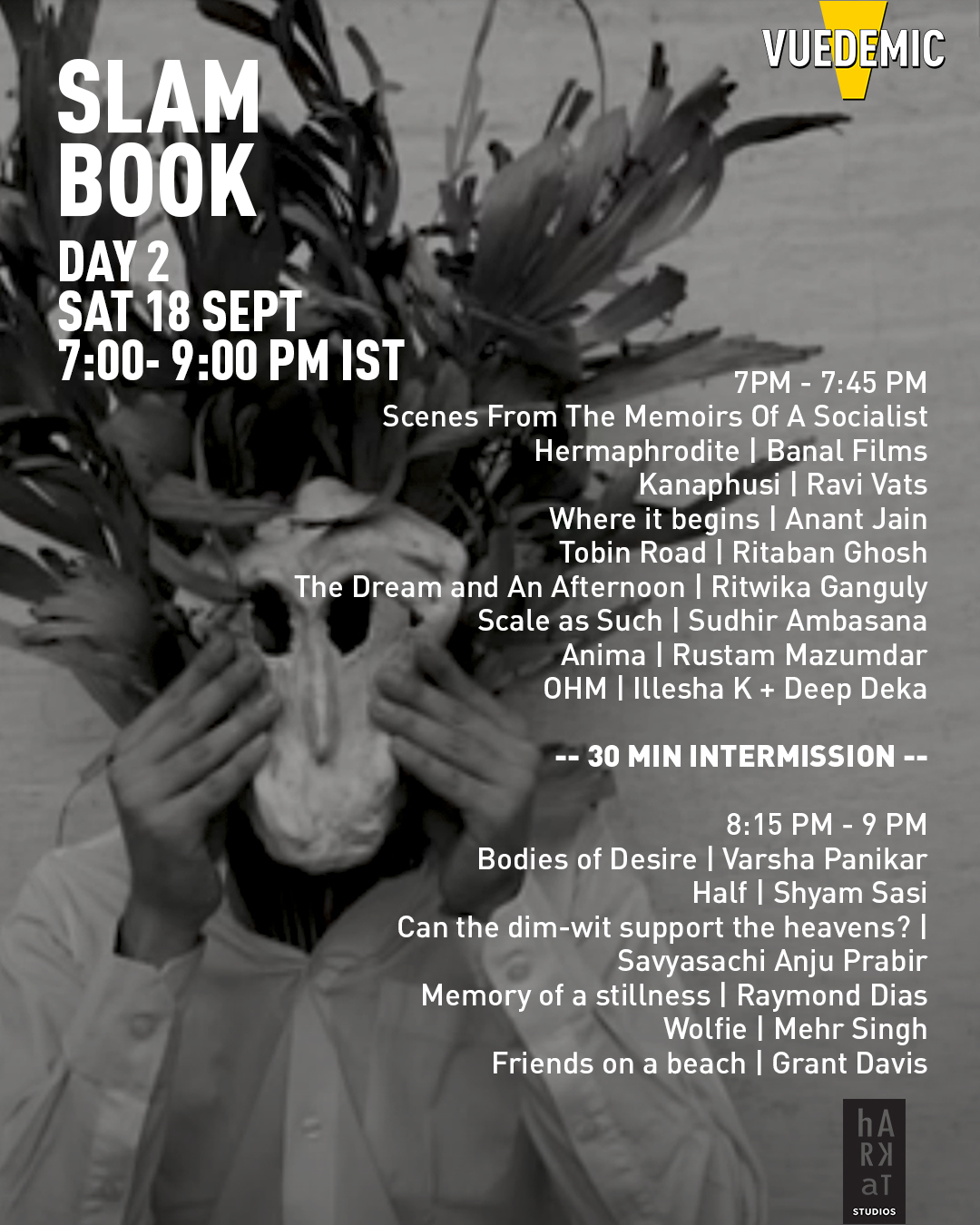 Bittersweet served as an epilogue to the festival, with shared sentiments of the days gone by, however expanding into its own body. In these slice of life shorts, viewers found a mix of nostalgia, longing, pain, and patience. These films observed, documented and traversed through their makers’ worlds with individualistic approaches, as well as through the lens of a community. The programme and festival was closed by filmmaker Payal Kapadia’s The Last Mango Before the Monsoon. 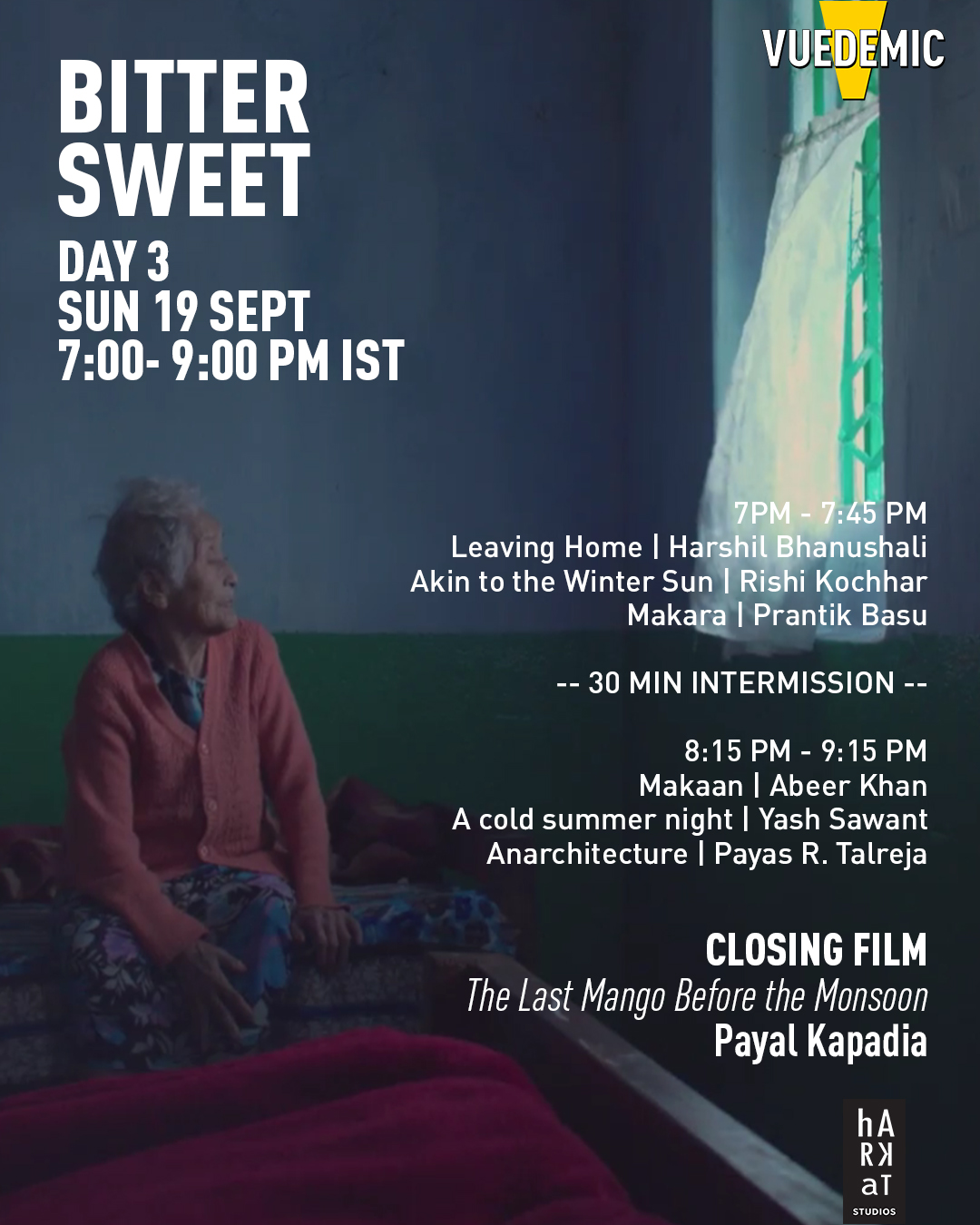